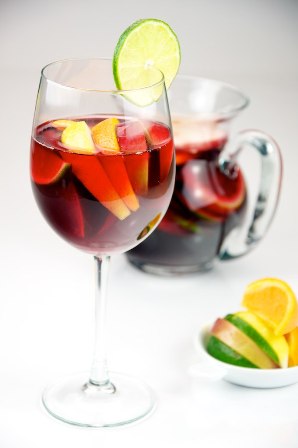 In a large bowl, combine the wine, brandy, orange juice, and sugar and stir until the sugar dissolves. Add the orange, lemon, and lime slices, the apples and refrigerate until well chilled, about 1 hour. Remove from the refrigerator and add the soda. Serve in glasses over ice.

Line 2 large jellyroll pans with aluminum foil.  Place the salmon in each pan skin side down.

Meanwhile, preheat the oven to 500 degrees.  Roast the salmon for 18 to 20 minutes, or for about 12 minutes per inch at the thickest part of the salmon.  The internal temperature should be 120 degrees on a meat thermometer when it is done.  Remove from the oven, wrap tightly with aluminum foil, and allow to rest for 15 minutes. Serve hot or at room temperature. Serves about 18 to 20 depending on portion size.

Heat the oven to 400°F. Place the duck breasts fat side up on a cutting board and use a small sharp knife to crosshatch them, cutting just through the layer of fat but not into the meat itself. Sprinkle thoroughly with salt and pepper.

Place them fat side down in a large skillet. Turn the heat on to low. Cook the duck breasts over very low heat for 10 to 15 minutes, letting the fat render out. The fat shouldn't spit or flare up; the heat should be low as possible. The goal here is to avoid cooking the duck breasts too much, and just to render off the fat.

While the fat is rendering, mix the pomegranate molasses, vermouth, orange juice, honey, cinnamon, cloves, and cardamom in a small saucepan and bring to a simmer. Simmer for 5 minutes or until it reaches a temperature of 210°F. Turn off the heat and set aside.

When the fat on the duck breasts looks cooked through and crisp, turn off the heat and remove the duck breasts. Carefully pour off all the liquid fat into a bowl, cover and refrigerate.

Return the duck breasts to the pan, fat side up now, and brush lightly with the pomegranate syrup. Put the pan in the oven for 5 to 7 minutes or until the internal temperature reaches your goal. If you prefer to cook to USDA standards, then cook to 160°F.

Remove the duck breasts from the oven, place on a cutting board, and tent with foil to rest for a few minutes. Brush again with the glaze (rewarm the glaze if necessary) and slice very thinly. Serve immediately.

You Will Also Need:

Into a heavy bottom sauce pan add: cranberries, sugar, wine, orange zest, vanilla bean and seeds. Season with salt and pepper. Add 2 orange quarters. Cook over medium-low heat until cranberries begin to soften and lose their shape and sugar has dissolved. Approximately 5 minutes. Remove from heat and allow to cool before serving. Garnish with additional orange zest if desired.

Season the lamb chops with kosher salt and chili glaze prior to placing under the broiler. Broil the lamb chops to the desired temperature. Toss mizuna with 2 teaspoons of Cranberry Citrus Chutney and place on plates. Plate the two lamb chops over the mizuna; serve the first lamb chop with 1 tablespoon of the cranberry citrus chutney as garnish.

Chef Tip: Cut lamb chops from the loin end of the rack - lamb chops will cook quickly (3-4 minutes per side for medium rare)

In 12-inch skillet over medium-high heat, heat ½-inch canola oil until hot. Carefully spoon crab mixture by rounded tablespoonfuls into hot oil, flattening slightly with spoon. Cook fritters about 2 minutes on each side until golden brown and crisp. Remove from skillet and place on paper towels to drain. Repeat with remaining batter.

In a food processor combine all ingredients except the oil. Pour oil into the pusher tub and combine until all the oil is gone. Dressing should be made a day ahead to have maximum flavor. Makes 1 cup and keeps in fridge for about 3 weeks.

Wash fruits and vegetables and dry. Prepare peaches, red onion, and cucumber. Set aside. Put arugula in a large bowl and toss sparingly with vinaigrette. Brush peaches with vinaigrette so they will not turn brown.

Place about 1 heaping cup of tossed arugula in the center of a salad plate. Scatter a small amount of red onion, cucumber slices, and then peaches. Dot with goat cheese and then almonds. Drizzle with about a Tablespoon of dressing. Serve immediately. You may also platter salad attractively and let guests help themselves. Serves 8. You will have vinaigrette left over. It should be stored in fridge and will keep fresh for about 3 weeks.

Let pizza dough sit at room temperature for at least an hour. Slice onions and then put olive oil and butter in a large fry pan and heat until melted. Stir in onions over medium heat and sauté over low heat for about 25 minutes. When onions are tender and balsamic and brown sugar, stirring over low heat until blended. Set aside. These may be done ahead, stored in fridge or frozen!

Preheat oven to 400 degrees. On a lightly floured surface roll dough into a rectangle, making sure it is not a perfect rectangle, of course. Line a baking sheet with foil and scatter a bit of cornmeal on it. Transfer flatbread dough onto your prepared sheet and begin by adding your caramelized onions, sliced pears, and gorgonzola on top of flatbread dough. Put in oven and bake for about 20 minutes or until cheese is bubbly and it looks incredible. Place arugula on top of flatbread, gently pressing it into the flatbread. Remove, cut into pieces and serve. Serves 6 to 8.

In a large fry pan add oil and butter and heat to medium. Add sliced mushrooms and onion and sauté for about 5 minutes and then add fresh thyme leaves. Continue to cook until mushrooms are tender. Season to taste with salt and pepper. Set aside to cool.

Prepare dough the same way as the other flatbread, laying it on a prepared baking sheet with cornmeal scattered on top. Scatter cooked mushrooms and onion on top of flatbread and then dot with crumbled goat cheese. Bake for about 18 minutes and remove from oven when flatbread looks golden. Cut into pieces. Serves 6 to 8. *You may also add some lemon zest on top of cheese before baking, if you like.

With fall upon us once more, we are eager to welcome the fruits of harvest. Here at Sextant, we are excited to say that September also means it's time for the second Wine Club shipment of the year! Your fall shipment will include four bottles for our Captain level members, and three for our First Mates. In this shipment, we've packed newly bottled vintages, exclusively available to our valued members.

Please ensure that your payment card information, and your billing and shipping addresses are up-to-date by logging into your account on our website. In order to receive your club shipment in a timely fashion, please verify this information by Monday, August 19th.

After September 30th, all remaining shipments will be sent to the shipping address on file during the week of October 7th. The payment card you’ve provided will be charged an applicable shipping cost. If you wish for your shipment to be held and combined with your November shipment, a $5 fee for storage will be added and billed appropriately.

Don't miss out on an incredible opportunity to purchase all of the wines in the fall shipment at 30% off the standard retail price. This special offer is available to you for just 30 days, between September 1st and September 30th. We encourage you to take advantage of this remarkable rate while time permits! Remember, the holidays are just around the corner! Please contact Elyse Goodwin or Megan Holst for ordering at 805-542-0133 or concierge@sextantwines.com.

I look forward to seeing you all very soon.